It’s amazing how DNS (the Internet’s “phone book”) can have so many different variations of how it’s used and abused. It’s a fundamental building block insomuch as the Internet is almost entirely useless without it.

On all of our platforms, DNS is forced when using the standard port and protocol over TCP and UDP port 53. Here are the firewall rules that are installed with our service:

On pfSense, these rules (among others) are inserted, but we’re showing just the DNS-forcing ones here on this screenshot: 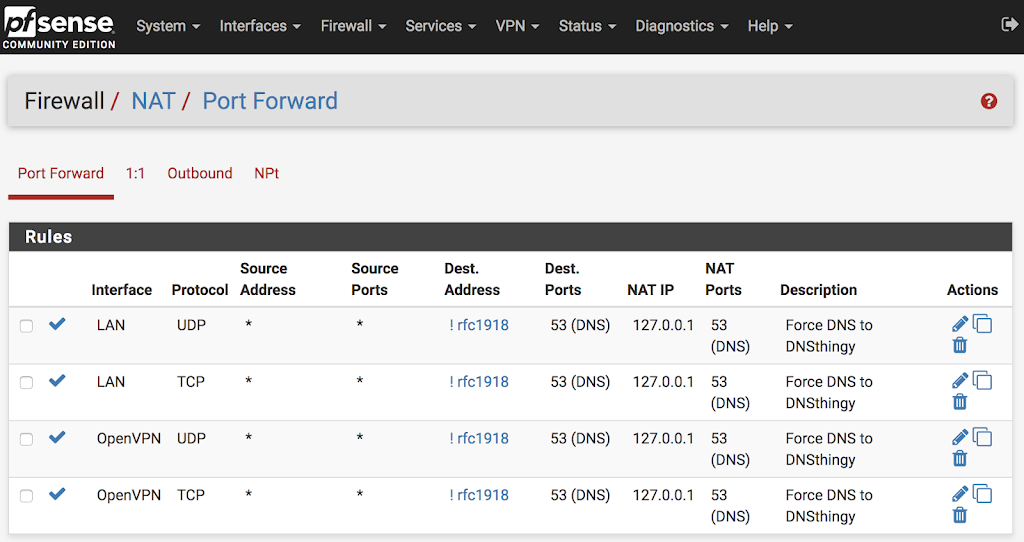 On ASUS routers as well as ClearOS/Linux variations, the iptables rules look like this at the command-line in a typical setup (sorry there’s no GUI for these rules on AsusWRT):

This command will show and include the forcing rules:

These types of rules are also referred to as DNS hijacking rules. Hijacking in a good sense, of course, because if you have a reason to distrust a device, you want to at the very least hijack its DNS usage to apply the policy of the router.

When DNS usage is forced, it makes it impossible to benchmark public DNS resolvers from “behind” one of these gateways. During benchmark tests, you want to disable the hijacking rules temporarily.

To disable these rules on AsusWRT or Linux, which will delete line number 2 and 3 based on the query above:

After ASUS reboot and/or Linux networking restart, the firewall rules will once again be auto-applied.

To disable these rules on pfSense, simply click on the checkmark to disable it, and apply the changes. After the benchmark tests are run, the rules can be enabled once again.

As a result of port 53 DNS enforcement on many edge devices, endpoint security software has begun to work around it. For example, Webroot uses port 7777. AVG and several others use port 443. Of course it’s easy to simply block destination port 7777 but when it comes to port 443 that’s not so easy as you would be blocking HTTPS (with TCP) and you’d be blocking QUIC (with UDP). This is where the zero trust model comes in.